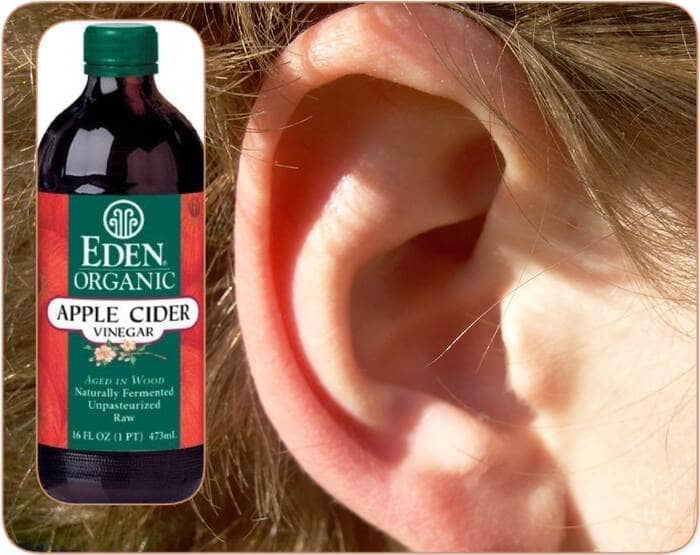 How to use apple cider vinegar for tinnitus? How does it work? Is it effective? What foods should I avoid if I have tinnitus problems? And finally, what are the other natural remedies to reduce the effect of tinnitus?

I. What Is Tinnitus?

Tinnitus is an abnormal sound, a kind of hissing or buzzing noise, which resounds inside the ear.

It is wrongly believed to be uncommon, but nearly a quarter of French people claim to suffer regularly from tinnitus. It is about 10% of western adults who are regularly affected.

This disabling sensation is on the rise because of the increasingly loud noises in our daily lives and the more frequent use of headphones.

Tinnitus can be a symptom of a pathology, a reaction to the medication, a sign of a mental disorder, or stress. It can also be related to poor blood circulation or earwax in the ears.

Some tinnitus is chronic, while others are occasional.

Although tinnitus can be treated by medical means, alternative medicine can also help to combat tinnitus.

Apple cider vinegar is not only useful in cooking; it is also a very practical product against various inflammations.

It is a natural treatment that regulates the pH of the body, and therefore promotes healing. This is the same action that apple cider vinegar has on tinnitus.

All these properties are useful for the treatment of the ear canal. Apple cider vinegar can thus soothe an auditory inflammation.

2. How Do You Use Apple Cider Vinegar for Tinnitus?

Put two teaspoons of apple cider vinegar in a glass of water.

If the preparation is too sour, feel free to add a teaspoon of honey.

Once the preparation is ready, drink it twice a day.

You can also insert apple cider vinegar directly into your ear. You need to mix the same amount of vinegar and water, and put three drops in your affected ear.

This will help you get rid of the earplugs.

Tinnitus is a kind of parasitic sound that can be perceived without actually existing. These noises are annoying, even painful, and can have various origins.

The antibacterial properties of this compound make it ideal for treating earaches. It is used to soothe certain ear ailments as a natural remedy, especially in the case of tinnitus.

III. Foods to Avoid in Case of Tinnitus Problems

If you have tinnitus, it may be wise to avoid certain foods.

For example, alcohol, coffee, and tobacco should be avoided.

This is also the case with very sweet products, such as sodas, or those containing certain substances. Substances such as quinine, even in small doses, should be avoided in food.

For this reason, foods containing cocoa, soy, cheese, lactose, or egg are prohibited. This is also the case with avocados, overripe citrus fruits, or bananas.

IV. Other Natural Remedies for Tinnitus

Garlic can help you fight tinnitus naturally. You will need 2 cloves of garlic and a spoonful of sesame oil.

Once you have cleaned and peeled your garlic cloves, fry them in the sesame oil and strain the liquid.

As soon as the mixture has cooled, drop two drops into your ear while tilting your head. Hold this position for a few minutes to let it work.

Do this every day for 7 days.

To use Ginkgo biloba for your tinnitus, you will need one cup of water (250 ml) and 10 g of the plant’s powder (one spoonful).

Start by heating the water, and pour the spoonful of ginkgo biloba into a cup of boiling water. This infusion should be taken twice a day.

There are also compresses or extracts. In the case of extracts, you can consume between 120 and 140 mg per week.

Ginkgo biloba is a plant that has anticoagulant and anti-inflammatory properties. Poor blood circulation is often the cause of tinnitus.

The action of Ginkgo biloba is thus useful to attenuate tinnitus, in particular, if it is due to a problem of this type.

Olive oil has properties that can be effective against tinnitus.

You just need to put about ten drops of olive oil in your ears every day.

Two drops of olive oil before going to bed is another way to get rid of your earplug.

The relaxing and soothing properties of olive oil can bring you real relief.

Choose extra virgin olive oil for its many qualities.

Olive oil is effective for several reasons. First of all, because it helps maintain normal blood pressure, olive oil acts on tinnitus. Tinnitus is often caused by blood pressure problems.

Secondly, olive oil is a food that helps improve blood circulation, another potential cause of tinnitus.

The use is simple. Heat the water and add the grated ginger. Once the infusion is ready, take it 2 to 3 times a day.

It may also be a good idea to chew a slice of raw ginger for several minutes. This is another way to use ginger to reduce tinnitus.

It is because it is effective against germs and improves blood circulation that ginger is useful against tinnitus.

Tilt your head, and remove the remaining earwax. Do this 3 times a week.

Since excess earwax is one of the causes of tinnitus, mustard oil is a plus to get rid of it.

It dissolves excess wax, acts on infections, and even protects the auditory system.

Once used, mustard oil is also able to protect the ear canal.

Onions can help you get rid of tinnitus. You will need a small onion, which you will chop finely.

For 1 or 2 minutes, put these pieces in the microwave. Once the liquid has cooled, strain it and put one or two drops in the affected ear.

With your head tilted, hold the liquid in your ear for about 5 minutes, then sit upright and let it drain out.

Do this several times a week.

Onion juice can clean the ear canal, and due to its antibiotic properties, prevent further infections.

Alpha-lipoic acid is an antioxidant. It has many properties. In cases of tinnitus, alpha-lipoic acid has an action on the free radicals that damage the health of the auditory cells.

For this reason, alpha-lipoic acid is a product of choice to fight against earaches.

It is usually taken in combination with vitamin E for better action. Alpha-lipoic acid can be found in foods such as beets, spinach, and sweet potatoes.

# Combination of Salt and Glycerin

Using a spray bottle, spray the liquid into each of your nostrils and your throat.

Do this three times a day until your nasal passages are clear.

This remedy can be very effective if your tinnitus is caused by blocked sinuses.

Castor oil is another remedy for tinnitus. Also called castor oil, this oil is rich in vitamins, minerals, and fatty acids.

In case of tinnitus, you can put three drops of castor oil in your ear for 8 days. Do this at bedtime, and keep the product in until the morning by covering your ear with absorbent cotton.

You can also massage your ear, from front to back, with castor oil. But this remedy only complements a medicated treatment.

To use holy basil for tinnitus, first, chop it to a paste. Extract the juice from this paste by putting it in a strainer to squeeze it.

Once the juice is obtained, heat it slightly. With a dropper, insert two to three drops into your affected ear. Do this twice a day for three or four days.

Holy basil is an antibacterial plant. This property gives it all its effectiveness in case of tinnitus.

Pineapple is a fruit that contains a multitude of vitamins, especially an enzyme called bromelain. For these different reasons, this food can act against tinnitus, especially in case of inflammation.

You can simply add pineapple to your diet. By eating pineapple constantly when you are suffering from tinnitus, you will reduce your symptoms.

Mistletoe is a plant full of beneficial properties for the body. It was used by the druids to treat various ailments.

With the consumption of mistletoe tea, you will reduce auditory stress and relieve your ears. Mistletoe tea also helps with blood circulation in the ears.

It is because of this that Manuka honey is effective in cases of ENT infections.

You can consume this honey directly, taking one to two spoonfuls of Manuka honey per day.

V. How to Treat Ear Infections with Apple Cider Vinegar

With your head bent, pour a few drops into the ear canal. Hold the position for about a minute while the solution takes effect. Do this between one and three times a day until you feel relief.

Gargle with this solution. This is a remedy that is also effective against sore throats.

Mix equal parts rubbing alcohol and apple cider vinegar. Using a dropper bottle, put 5 to 10 drops of the solution into the affected ear.

Cover the ear with absorbent cotton or a clean cloth. For about 5 minutes, lean to the side to let the drops penetrate the ear.

Do this until your tinnitus symptoms disappear.

Honey does indeed have many benefits for ear health and can provide relief from ear infections. One of the best ways to use honey for ear infections is as a poultice. Do this with Manuka honey in particular.

Tinnitus–a study of its prevalence and characteristics