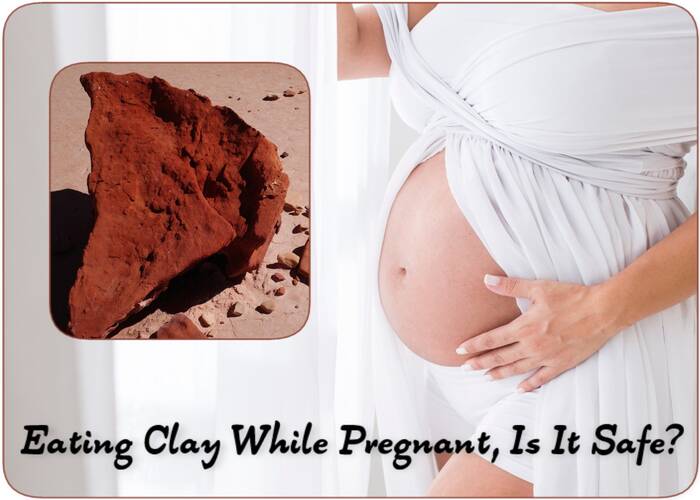 I. what is pica in pregnant?

Like bulimia or anorexia, Pica disease, or Pica syndrome, is similar to an eating disorder.

Pica is defined as an eating disorder characterized by the ingestion of non-nutritive, non-edible substances that affects many pregnant women.

The name comes from the Latin word pica, which refers to the magpie, an animal known for this type of behavior. Pica is diagnosed when the person has been eating non-food substances or objects repeatedly for a month or more.

It is a worldwide phenomenon and may be more common during pregnancy.

II. What are the most well-known causes of pica?

The causes are diverse and vary from one individual to another, for example in pregnant women, it can be due to:

The consumption of clay is transmitted in certain families from generation to generation.

It is very effective for some women to relieve nausea and vomiting.

For some women, consuming clay during pregnancy acts on the fetus like consuming food

A deficiency in iron and certain minerals such as zinc is often the cause of pica in pregnant women. This is why you should not hesitate to talk about it during a consultation.

Eating frozen foods can sometimes be a common cause of pica in pregnant women.

No one knows what causes these unusual cravings, but a combination of biochemical, psychological, and cultural factors can be concluded.

Women who say they consume clay use the verb “to eat” without referring to food. They describe this practice as being an “appetizer”.

This means that this practice appears to them as an activity that occupies their time while giving them indescribable pleasure.

1. How does eating clay affect pregnancy?

During pregnancy, the more clay a woman consumes, the more she puts her fetus at risk. Kaolin or clay seriously harms pregnancy, as it slows down the absorption of iron by the cells which gives it the ability to create anemia. It can create:

2. Is eating clay safe during pregnancy for women

Not necessarily! Although the organisms are different, the regular consumption of clay can create harmful effects in some women and nothing in others.

The doctor strongly advises against the consumption of this clay. “Kaolin’s harmful effects on health are more numerous than its benefits.

Because it causes anemia and can slow down the harmonious development of the baby. Therefore, the mother can give birth either prematurely, or a child with unsatisfactory development, “says the doctor.

Yes, of course, just like food, the clay you consume during your pregnancies reaches your baby and can therefore create disorders.

4. Which clay is good for eating?

White clay or kaolinite is not very mineralized and therefore softer than other forms of clay.

5. How to stop eating clay during pregnancy?

The most important thing when you decide to stop eating clay is to stand firm and see it through.

There are some simple and effective tips to help you effectively resist the urge to eat kaolin.

Whenever the urge to eat kaolin arises, effectively replace it with something else like candy, cookies, or other things.

There is no effective standard treatment for this disease. Patients are managed on a case-by-case basis. Sometimes abstinence therapy is the solution to make the disorder go away over time, other times psychiatric treatment is needed.

Some women confirm that kaolin stops nausea. What we call nausea is simply a phenomenon of hypersalivation.

Clay has absorbent properties, which allows it to quickly absorb this excess of saliva.

In addition, the components of clay such as mineral salts and aluminum effectively treat many stomach problems or gastritis. Generally, consuming healthy clay in moderation can only help the mother and the fetus to be healthy.

V. Potential Side effects of eating clay during pregnancy

This attachment between the iron and the clay will cause blood thinning problems or anemia in the mother and her fetus.

When anemia becomes very severe in a pregnant woman, it affects the course of the pregnancy and can cause a miscarriage.

Another consequence of clay consumption on health is constipation because clay can carry away waste contained in the intestine.

If this waste is important, it can cause “traffic jams” like on the highway, hence constipation!

The number of people with Pica is not exactly known. This disorder can occur at any age in childhood, adolescence, or adulthood, but children and pregnant women seem to be the most affected.

Pica syndrome occurs when the affected person is older than 2 years of age. Before this age, children do not yet know what is edible and what is not.

Moreover, the disease would affect children more readily. Especially those who feel a loss of control or anxiety, and in adults with mental disorders (autism, schizophrenia) or with intellectual disabilities.

VII. Other questions about pica during pregnancy

Kaolin has no taste, it is not food, it is nothing, although women have become slaves to this habit.

They cannot live without it; it is like alcohol.

Pica is an eating disorder. To learn more, it consists of regularly consuming things that are not food.

Pica is not just about eating dirt. It is also about the consumption of non-nutritive and non-edible substances.

In pregnant women, however, pica consists solely of eating clay.

Geophagy is the act of eating dirt. It is very common and frequent in young children and pregnant women.

For the baby, geophagy during pregnancy has many consequences, due to complex ionic interactions with the digestive tract.

The consumption of clay can lead to iron deficiency. It can also be fatal in case of post-partum hemorrhage in severely anemic women.

Indeed, the consequences are much more important during the 2nd and 3rd trimesters when the baby is already more resistant.

Ingestion of soil can cause toxoplasmosis and malformations in the fetus, mainly in the eyes and, less frequently, in the brain. In more exceptional cases, it can cause a miscarriage.

This is one of the effects of Pica syndrome, a behavioral disorder that induces the consumption of non-nutritive substances such as clay, earth, or paper.

5. How can I prevent pica during pregnancy?

In order to avoid food poisoning, the pregnant woman must ensure that everything she consumes is free of pathogenic elements.

To do this, it is important to respect the rules of hygiene, preparation, conservation, and defrosting of food.

To avoid pica syndrome as much as possible, the pregnant woman should neither start nor develop a craving for clay.

6. What should I eat when craving soil?

Some women, to combat their addiction to clay, consume products with a chemical makeup similar to clay.

On the other hand, other women replace the craving for clay by consuming products such as candy, chocolate, cookies, and others.

Snacking can also replace the urge to consume clay.

7. What Vitamin Are you lacking when you crave dirt?

Geophagy can be promoted by malnutrition, especially iron and zinc deficiencies. Iron and zinc play a very important role in the regulation of appetite.

Geophagy can aggravate these deficiencies by decreasing the absorption of iron and zinc. Pica evolves into severe anemia, with iron and vitamin B12 deficiency.

8. What happens if pica is left untreated?

While pica disorder can be difficult to detect in some people, it poses serious threats if left untreated.

Ingested objects or substances can be a health hazard.

The main risks are poisoning from certain heavy metals such as lead, obstruction, or perforation of the digestive tract.

It can also cause choking, poisoning, or transmission of parasites. Other complications such as constipation, tooth abrasion, vomiting, and stomach ache may also occur.

9. What hormone causes cravings in pregnancy?

The hormone beta-HCG is responsible for cravings and nausea in early pregnancy.

Bentonite Clay as a Natural Remedy: A Brief Review

Clays and health: An introduction