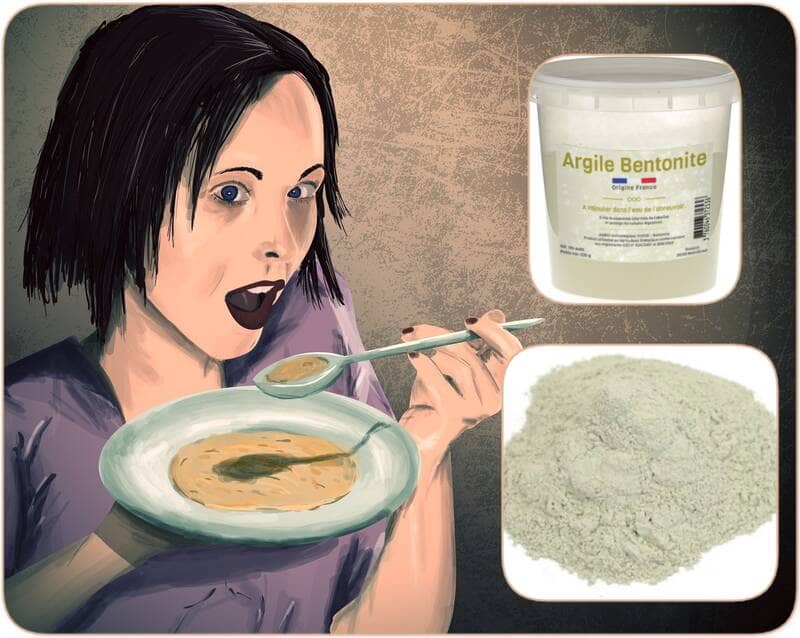 Why do I want to eat clay? Is it a disease? A syndrome? Or a sign of an urgent metabolic need? Is it a danger? Is it good to eat green clay during pregnancy? And finally, how can I stop eating clay?

Geophagy is the consumption of earth. It is also an extremely ancient practice, found in several peoples around the world.

Eating clay is often associated with pica, which is a mental disorder. When one develops pica, one is seized with an irresistible urge to consume non-food items. This can be sand, cigarette ash, or even gasoline.

But this ancestral practice of eating clay has several facets.

2) Clay is Consumed by People and Animals

In West Africa and sub-Saharan Africa, clay (white, green, or other) is generally found on the markets. It is intended for consumption, as women in these countries often use it regularly.

Pregnant women, in particular, use it to chase away nausea during their pregnancy.

Clay was also used in the Middle Ages, both for internal and external use.

In the animal world too, clay is part of the food routine.

Macaw parrots found in the Amazon take it regularly during periods when they have less to eat. The properties of clay enrich their diet.

As well as several species of primates, such as mountain gorillas, which benefit from its healing properties.

Among all the clays to consume, bentonite clay is the most commercialized. This is due to its high silica and mineral content. It also contains potassium, sodium, iron, calcium, iron, and magnesium.

Silica in particular, which is found in all clays, is important because it is part of the constitution of the human body tissues.

This substance also contributes to the solidity of the articulations, and ligaments. To the good health of the teeth, and the skin.

It also helps to strengthen bones, nails, and hair and ensures the proper functioning of the immune system.

4) Consumption of Clay: Between Beliefs and Benefits

Clay is earth. For many peoples, clay has a strong religious and spiritual connotation.

Its consumption is symbolic, a way to get in touch with the creative matrix.

Beyond beliefs, clay is a natural anti-poison, as well as an anti-diarrheal. It is also earth rich in minerals. This is why it is found in commercial medicines, notably in gastric dressings.

II. Is it Good to Eat Clay During Pregnancy?

If green clay is excellent for soothing nausea, it can also cause an iron deficiency. This could subsequently cause miscarriage or retardation in the infant.

Clay has, for reasons still unknown, a certain capacity to cause an addiction. Also, if small quantities do not hurt, people who consume it regularly take enough to put their health at stake.

This can be devastating in the case of pregnant women.

It is generally observed that young children tend to eat earth. But the older we get, the more we break this habit. But not everyone does.

There are two reasons for this desire to eat either dirt or clay.

This is an eating disorder that is characterized by the ingestion for more than a month of substances that are not edible or nutritious such as dirt or chalk.

At this time, the causes of this disorder are controversial and poorly understood. Pica can be benign, or it can be life-threatening.

In general, there are two types of geophagy.

The instinctive animal geophagy is the consumption of clays to heal oneself or to absorb minerals.

And the associated geophagy which concerns humans and great apes.

Geophagy has positive effects on the organism since the clay consumed allows the reinforcement of the intestinal barrier and to fight against constipation, and irritable bowel syndrome among others.

Apart from these consumptions, clay is also used in medicines. Particularly in anti-diarrheal drugs or those that help fight constipation.

There are several advantages to eating clay.

V. Is There any Danger in Eating Clay?

Despite the benefits that clay can provide to our bodies, there are still some dangers.

– There may be risks of allergy to the constituents of clay

– The consumption of clay can cause diarrhea, constipation, loss of appetite, flatulence…

– It can also have effects on the genitourinary system

– It can cause a bad absorption of iron and cause anemia

– Geophagy can be the cause of lead poisoning

– It can also hurt the kidneys, especially in people suffering from kidney failure.

VI. Where to Find Edible Clay?

There are several ways to obtain clay for consumption.

Organic stores offer it, as well as certain health food stores or on the internet.

It is always important to know the origin and, therefore, the qualities of the clay you buy.

VII. What is the Great Benefit of Clay for the Stomach?

If there is one virtue of clay for the stomach, it is its action against toxins. The absorbing power of clay allows it to act in cases of stomach ache for example.

In these cases, clay absorbs the toxins and gases present in the digestive tract. Because it is absorbent, it fixes all these wastes in its structure.

The consumption of clay has virtues for the body. When it is part of a cure, eating clay is not a sign of pica.

On the other hand, if the consumption of clay becomes frenetic and compulsive, it is a sign of pica. And urgent measures must be taken to avoid the aggravation of the disease.

IX. Is There a Link Between Clay and Kaolin?

Kaolin is another form of clay, white clay. It gets its name from its richness in kaolinite, which is an aluminum silicate.

In China, where it was discovered, kaolin is used in the manufacture of porcelain.

Kaolin is sold throughout West and Central Africa, as well as in Chinese grocery stores.

X. How to Stop Eating Clay?

The first problem with eating too much clay is that it is rarely seen as a problem.

Clay has soothing virtues for those who take it, who then find it difficult to do without.

When you realize the risks involved, the first thing to do is to consult a general practitioner to check whether you are suffering from an iron deficiency.

If this is the case, taking food supplements can make the problem disappear. But the consumption of clay can also be linked to a psychological state (stress). In this case, it is necessary to find ways to manage stress and consult a specialist if necessary.

XI. What Kind of Clay is Edible?

Almost all clays can be eaten. However, it is preferable to consume green clay or white clay.

Green clay is rich in magnesium and organic matter. It helps to heal irritated stomachs.

White clay is recommended for people who have irritable bowel. It is clay that is softer and not very mineralized.

Taken in large quantities and in an uncontrolled manner, clay can cause a lot of damage to your reproductive system.

On the other hand, controlled use can treat ailments, especially in the treatment of large fibroids.

It should be noted that green clay is absorbent and plays a curative role in the treatment of fibroids.

It should be noted that green clay allows to soothe contractures, pains, and inflammations, substances that have penetrated your body.

And it also eliminates bad odors and protects the gastrointestinal mucosa.

There are several reasons why you may want to eat clay. The most common are geophagia and pica disorder. These are mental disorders.

The sufferer has an irresistible urge to eat or consume substances that are not food, including soil and clay.

Yes, of course, eating clay is addictive. Mental disorders such as geophagia and pica are the result of this addiction.

Like any addiction, it can have negative effects on our bodies. By creating disorders or diseases on the digestive system such as constipation and diarrhea…

To avoid this addiction, we strongly advise you to discuss it with your doctor before starting a cure.

Edible clay is neither sweet, salty, nor spicy… It has a neutral, slightly metallic taste. It has an earthy taste simply.

At this time, there are no studies that suggest that eating clay or soil affects fertility. However, on many health forums, many people claim that in East Africa, green clay is used to unblock the fallopian tubes.

However, this treatment with green clay must be accompanied by a diet program set up by a naturopath or dietician.

XVII. Is Clay Bad for your Lungs?

Clay can be bad for the lungs if inhaled in powder form and in large quantities. It can cause chronic bronchitis or pneumoconiosis.

However, clay can be used to soothe feelings of heat in the chest or respiratory discomfort. You just have to prepare cataplasms.

You must warm your clay and put a thick layer on your back or chest. The poultice is left on for 2 to 4 hours maximum.

Healing and edible clays: a review of basic concepts, benefits, and risks

Would You Like a Side of Dirt with That?

CLAY EATING PROVES WIDESPREAD BUT THE REASON IS UNCERTAIN

Benefits of Bentonite Clay for the Feet

Does Bentonite Clay Detox the Liver and Cleansing it?

How to heal a fissure fast with clay Soil?

How to Treat Ganglion Cyst with Clay?