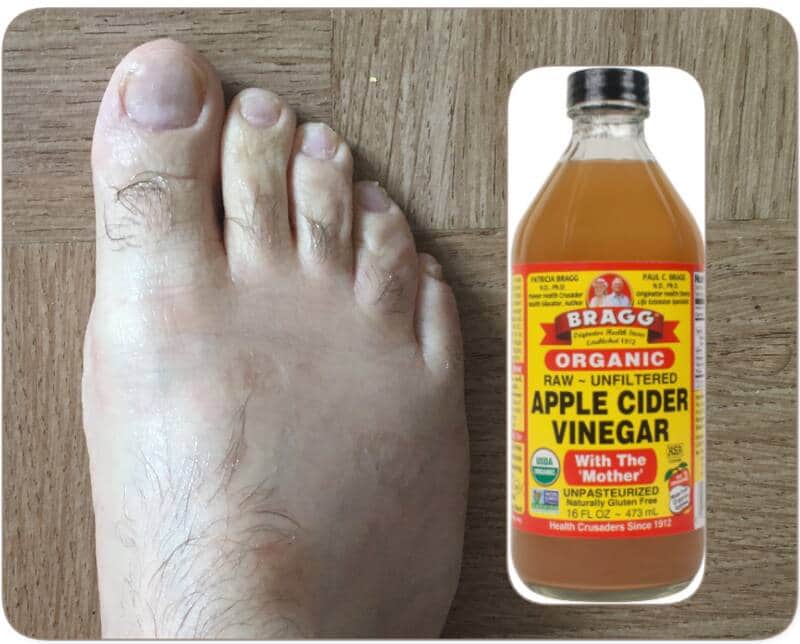 To help treat gout with cider vinegar, or at least relieve it, there is no simpler natural treatment. Very easy to prepare alone or in combination with other natural products like lemon and baking soda.

Its use is usually done to avoid having gout by feeling the first symptoms, otherwise, it is an excellent remedy to relieve all joint pain, including gout. Try it, you will see for yourself!

Gout is an inflammatory disease. It is caused by an abnormally high level of uric acid in the blood. This is called hyperuricemia. It is in the form of crystals that uric acid accumulates in the joints, which become painful.

Purines are present in certain foods, such as meat and fish. They are the ones that are transformed in the body into uric acid.

Because of this, gout was considered a “rich man’s disease”. These two products were historically not available to everyone.

Gout can be caused by kidney disease or a diet that is too rich. Obesity is therefore an aggravating or even triggering factor. Lead poisoning and certain medications can also cause it.

The symptoms of gout are a pain in the joints, often nocturnal, due to the accumulation of liquid at this level. During a gout attack, it is also possible to have a fever, tachycardia, and even chills.

II- What Is Apple Cider Vinegar?

Under the name of cider vinegar, we find a liquid resulting from the fermentation of apples. It is of course the fruit, once transformed into juice, undergoes a double fermentation.

Apple cider vinegar would exist for more than 5000 years. It would have already been used in ancient times for its therapeutic properties, among others.

The use of apple cider vinegar can indeed bring relief to people suffering from gout.

This pathology has as symptoms joint pains.

A gout is a form of arthritis. The pain can be alleviated by cider vinegar, which cleanses the toxins present in the joints.

Cider vinegar is a natural food, which is obtained by the fermentation of apples. Rich in antioxidants, as well as phosphorus, sulfur, potassium, and iron, it can have a multitude of uses.

Malic acid is a compound found in cider vinegar. It has the ability to purify the body and, thus, promotes the elimination of uric acid.

Gout manifests itself through violent attacks, which are called gout attacks. These are phases of intense pain, during which the joints become inflamed.

Moreover, it has been demonstrated that cider vinegar is an asset to losing weight.

Obesity is a risk factor that can lead to gout. Also, by helping to lose weight, cider vinegar reduces the risks of developing this pathology.

This is what a 2010 study has proven. Carried out on nearly 12,000 men, aged between 35 and 57 years for 7 years, it established the link between weight and uric acid levels.

It concluded that men who had lost a certain amount of weight (22%) were about four times more likely to have effectively lowered their uric acid levels.

3. How to Use Cider Vinegar to Relieve Gout

The consumption of cider vinegar is therefore an asset in the fight against gout. To do so, there are various methods and recipes.

One of them is to put two teaspoons of cider vinegar in a large glass of water.

To this, add 2 spoons of honey and mix it with a spoon. Drink this preparation with each meal.

You can also be satisfied with a spoonful of cider vinegar in a glass of water, and drink this daily.

As gout attacks the joints, cider vinegar can be added to a hot bath to relieve them. After 45 minutes, you will feel better.

All these uses of cider vinegar act as well on the gout of the foot as on those of the wrists or the ankles.

4. How Long Does it Take for Apple Cider Vinegar to Work?

The action time of the cider vinegar on the gout is 45 minutes, especially if you use it in your bath.

All you have to do is pour two cups of cider vinegar into your bath water and bask in it.

5. PH Levels and Implications for Gout

Gout is one of the pathologies that have its origins in an imbalance of the body’s pH. In gout, there is too much uric acid in the body, which develops too much acidity.

Scientific studies on the effect of apple cider vinegar on people with gout are rare.

Nevertheless, there is no reason to believe that the use of cider vinegar could aggravate gout; quite the contrary.

Cider vinegar is often included in alkaline diets, for a balanced pH. This provides relief in case of gout.

IV- Risk and Side Effects

There are, as with all products, some side effects and contraindications to taking cider vinegar.

Cider vinegar can hurt dental health, especially if it is frequently consumed. It may therefore be wise not to abuse it, and to always dilute it in water or another liquid.

In cases of stomach ulcers, the consumption of cider vinegar can accentuate the effects of the disease.

It is therefore not recommended in this case, nor cases of gastritis or gastro-esophageal reflux.

The kidneys are among the most important organs in the human body. They constantly filter the blood that circulates in the body, to extract excess salt or any other harmful element.

Far from being considered a danger for the kidneys, cider vinegar is a cleanser. It helps the kidneys to function better.

Blackcurrant is recommended to fight against gout. The leaves of this plant have beneficial effects for people suffering from this type of rheumatism. On 5 to 10 g of dried blackcurrant leaves, pour 250 ml of boiling water. Let the whole infuse for 15 minutes.

You can drink this liquid twice a day. You can also take 5 ml of fluid extract twice a day before meals.

Against acute attacks of gout, the use of autumn colchicum can be very helpful. This plant contains colchicine, which is a powerful alkaloid. It is also for this reason that colchicum should be taken with caution.

Every 2 hours, take 1 mg of colchicine, then lower doses every hour until the pain disappears.

Celery seeds work in the event of a gout attack. They not only help to calm the pain but also lower the uric acid.

Use them by putting celery seeds in boiling water. Once they are soft and after draining your preparation, drink the water in a cup. Do this every day.

An American study has established the positive impact of eating cherries on gout.

Thus, people who have consumed cherries would have a 35% less chance of suffering from gout within 48 hours, than those who have not consumed them.

Even if the abusive consumption of coffee involves risks, it would also have the advantage of reducing the risks of gout.

Studies conducted in Washington and Vancouver have shown that coffee reduces the concentration of uric acid in the blood. This one is responsible for gout.

Ginger is used as a painkiller in case of gout. This vegetable is an antioxidant.

By applying it as a paste on the inflamed joint at least once a day, you will notice an improvement in your general condition.

People with high levels of vitamin C in the body would be less likely to develop gout than others.

Also, taking a vitamin C supplement would help reduce gout attacks. However, these results are not unanimous in the scientific community.

Foods rich in purines, such as red meats or seafood, increase the probability of being affected by gout. For this reason, they are not recommended in case of gout.

Alcohol is also a danger, which increases the risk of exposure to gout. Beer and red wine especially, are very rich in purines.

These products not only reduce the level of uric acid but also eliminate it through the urine.

The virtues of cider vinegar are numerous. One of them is the effect it has on acetic acid.

Cider vinegar can lower the level of cholesterol in the body.

The anti-inflammatory properties of cider vinegar have been known since ancient times. This product can reduce pain or burning sensations.

This is particularly possible in the case of insect bites. Simply apply a cotton ball soaked in cider vinegar to the inflammation to feel relief.

Consuming cider vinegar also works on diabetes. Indeed, 15 to 30 ml of cider vinegar in a meal reduces insulin resistance in the body.

It acts especially in cases of type 2 diabetes. But the effectiveness of cider vinegar is not unanimous.

Because it eliminates toxins in the body, cider vinegar thins the blood.

As a result, it improves blood circulation and reduces blood pressure. This effect is largely due to the quercetin in which cider vinegar is rich.

# Can Help to Lose Weight

In a diet to lose weight, cider vinegar can help a lot. It acts first in the body by helping to eliminate accumulated fats.

Like cider vinegar, balsamic vinegar is rich in acetic acid. It has an antioxidant effect.

Balsamic vinegar is not bad for gout. It is also good for joint health and acts in case of overweight.

It is difficult to find studies that deny or confirm the effect of cider on gout. Cider being alcohol, it is not inconceivable that it increases the level of uric acid in the body.

To fight gout, mix two teaspoons of cider vinegar in 250 ml of water, to which baking soda would have been added.

Two teaspoons of honey complete this drink. Take a glass as soon as necessary, without going beyond 3 glasses maximum per day.

Apple cider vinegar and lemon juice both help to reduce uric acid in the body. An asset to fight against gout.

You can make a drink from these two products. In a glass of water, add the juice of a lemon and a teaspoon of cider vinegar.

You can also mix cider vinegar with olive oil and apply it to the painful areas.

Gout: An old disease in new perspective – A review

What are the signs and symptoms of gout?