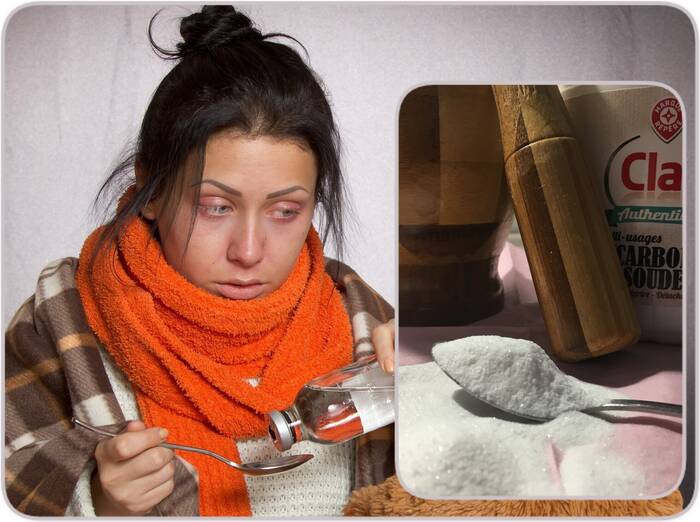 Baking soda for flu, colds, coughs, and sore throats is a simple and basic tip to quickly relieve our body from the attacks of bacteria and other viruses in our respiratory system.

It is especially indicated to be used in the first moments of infections as well as for small coughs and infections that do not necessarily require consultation of a doctor.

A very simple use that should be repeated several times a day until the symptoms disappear.

Here is a text that explains it all in a little more detail.

I- Brief review of the causes of coughing

Coughing is a natural action of the body to evacuate mucus present in the respiratory system. There are two types of cough: wet cough and dry cough.

Dry cough is a cough that can be associated with asthmatics. It is manifested by coughing fits. While the wet cough allows evacuating mucus from the throat.

There are many causes of coughing. First of all, diseases such as colds, asthma, allergies, heart problems, and bronchitis. To these pathologies, we must add whooping cough or, in more serious cases, bronchial cancer.

But cold and inhalation of irritants such as dust or smoke can also cause a cough.

Some medications can cause coughing, especially those for high blood pressure. Non-steroidal anti-inflammatory drugs also cause dry coughs.

Coughing can also be psychological, caused by a nervous tic or shyness.

What exactly is the flu?

There is not one flu, but several types of flu.

It is a respiratory disease caused by influenza viruses, it is often very acute and very contagious.

The virus responsible is influenza type A, B, or C.

There are many different types of influenza viruses.

This great variety is linked to genetic mutations or gene exchanges between viruses.

Thanks to their great capacity for mutation, they acquire new properties very quickly and easily fool our immune system.

The common cold is an illness caused mainly by a virus. However, the cold is a very important risk factor.

The common cold is an upper respiratory infection caused by more than 200 viruses (nose, nasal passages, and throat)

It can be transmitted, and it should not be ignored. Even if it remains a mild pathology, it is still very embarrassing.

The effectiveness of baking soda against sore throat and cough is related to its antibacterial action. Therefore, baking soda acts in the throat against bacteria that are attached to it.

Thus, in cases where the cough is a symptom of a viral or bacterial pathology, bicarbonate will act. It could be a cold or the flu, for example.

If the cough is caused by irritating substances (smoke for example), baking soda can also act.

Because of the cleansing action of baking soda, the effect of these elements is stopped. They then leave the throat to be evacuated by the stomach and eliminated.

In addition, baking soda is an anti-inflammatory. Coughing is often painful for the throat, especially when it is prolonged. It can make swallowing difficult and cause sore throats.

Taking baking soda is an excellent way to relieve an irritated throat.

It should be noted that the efficiency of baking soda to treat coughs must be put into perspective.

And if a cough is persistent, we advise you to consult your doctor who will diagnose the real reasons for your cough which does not want to leave.

He will diagnose the real reasons for your cough which does not want to go away and will give you consequently adequate treatments.

Remember that the human body with its immune system will always need time to get rid of the different viruses that attack its respiratory system.

So we will always have a good week of illness whether it is the flu or rum.

And sometimes, the viral load turns out to be quite important and requires a strong treatment with antibiotics.

2. How to use baking soda to get rid of viruses and cough

In a glass, put warm water. Add your baking soda and lemon juice to it. Mix it all with a teaspoon.

In a glass, put warm water. Add your baking soda and lemon juice to it. Mix it all with a teaspoon.

Gargle your throat with this solution until your cough disappears completely.

Do this several times during the day, especially at night, before going to bed.

It is also possible to do this gargle with baking soda only, without the lemon. Make it part of your health routine.

Baking soda will prevent the bacteria responsible for coughing from taking hold and growing.

For a better effect, always keep your throat covered, as well as take warm drinks as much as possible.

Remember that ingesting a reasonable amount of baking soda is not dangerous for humans.

III- What happens if you use too much baking soda

Using a little too much baking soda in a recipe or alone in a glass of water is usually of no consequence except for the bad taste it gives to the food or water it is mixed with.

But sometimes, when there is an obvious overdose, it can induce serious stomach ache, nausea, vomiting, and a great thirst that doesn’t go away so soon.

Also, a scientific study has managed to establish a rather serious hypothesis about the lethal dose of sodium bicarbonate.

According to them, it is in the range of 200 -300 g depending on the weight and metabolic strength of the individual.

In cases of oily cough, you can use onion to get rid of it.

Simply cut one into strips, preferably a white onion.

Spread these thinly on a compress, and apply the compress to your neck and chest.

Leave the compress in place for about 30 minutes.

Another method is to make yourself an onion syrup.

After chopping 6 white onions, add half a cup of honey to it. Then, let it simmer in a water bath for 2 hours.

Then strain the mixture and keep only the liquid.

You have a cough syrup, to be taken several times during the day.

Boil a chopped onion in a pot of water. Then drink the infusion to soothe your cough.

The antibacterial properties of the onion explain its action on coughs and sore throats.

2. Clove against cough and viruses

It is in syrup that the clove is effective against cough and viruses.

In the morning, your syrup is ready, you just have to remove the cloves to consume it.

If the clove is so often used against dental problems, it is for its anti-inflammatory action. An action that can be very useful in cases of sore throat.

3. Garlic and olive oil against cough

Cut cloves of garlic and add thyme and olive oil. Let it sit until the mixture becomes thick.

You can then take a spoonful on an empty stomach every day for more effectiveness.

Garlic is a germicide, it disinfects and purifies. Your cough will disappear quite quickly with this recipe.

In oil of friction:

Heat olive oil in which you have added garlic cloves. Let it infuse well, and when the oil is hot, put it aside.

Once cooled, store it in an airtight bottle with the garlic pieces inside.

In case of bronchitis or a cold, warm this mixture. Coat your hands with it and rub it on your chest and scalp.

It is best to do this before going to bed. Cover up before getting into bed.

Although the smell is repulsive, this remedy is very effective against coughs.

To make a cider vinegar gargle, simply pour half a cup of water into a container. Add 2 tablespoons of cider vinegar and a pinch of salt.

Heat the mixture over medium heat. Once hot, take it off the heat and let it cool.

You can then gargle with this mixture several times a day.

Cider vinegar has antibacterial properties that will help eliminate the bacteria responsible for coughing.

Bring two glasses of water to a boil, to which you have added chamomile. Two to three teaspoons of chamomile (or tea bags) are enough.

To the mixture, add a teaspoon of baking soda and turn off the heat. Transfer your mixture from the pan to a bowl.

Once you have covered your head with a towel, bend over the bowl and breathe in the steam deeply. Do this for as long as possible.

Simple steam is often used for coughs. It diffuses into the lungs and bronchial tubes and clears them. But combined with chamomile and bicarbonate, the effect is even better.

Because chamomile is soothing, and bicarbonate is antibacterial.

How to Clean Your Stomach and Intestines Naturally with Baking Soda

How to dissolve gallstones fast with baking soda?

Can baking soda be used to cleanse the liver?

How to Remove Dark Spots on Face with Baking Soda