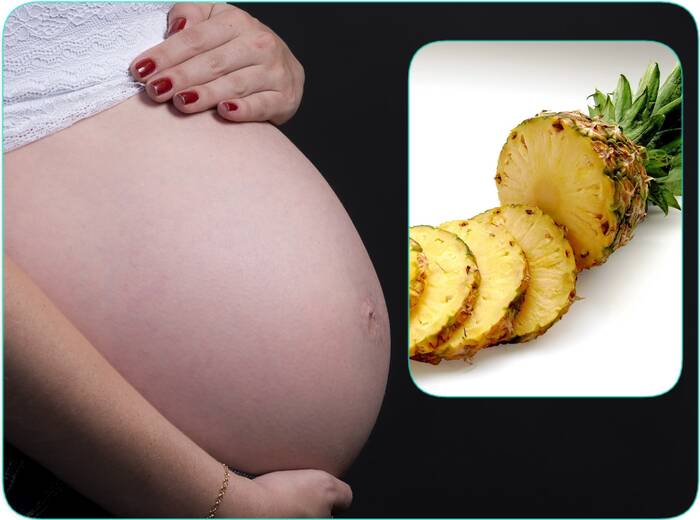 Does pineapple have virtues for pregnant women? A very relevant and controversial question for a cautious answer due to the lack of scientific evidence regarding the possible dangerousness of pineapple during pregnancy!

Follow us, we will try to see together the opinions of the two sides which are torn apart on the attitude to take regarding this issue of “to be or not to pineapple”

I- Is pineapple dangerous for pregnant women?

Some argue that if a pineapple is consumed in the first three months of pregnancy, it can cause a miscarriage.

This can be caused by bromelain which is a substance contained in pineapple.

It should be noted that there are not enough scientific studies on this subject. Studies have generally been carried out on animals and none has studied the link between bromelain and pregnancy.

Others maintain that the pregnant woman can consume pineapple after the first trimester of pregnancy. However, she must first consult a doctor. Does pineapple really have any virtues for pregnant women?

II- Does pineapple have virtues for pregnant women?

1# The virtues of pineapple during pregnancy (Yes or No)?

As we said above, some people believe consuming pineapple is dangerous for a pregnant woman. This, they say, is because of the bromelain it contains.

The latter can cause softening of the cervix leading to a miscarriage or early delivery.

The opposite is true for others who argue that pineapple has virtues. Since we cannot give you a definite answer, we nevertheless recommend that you seek medical advice before consuming it.

For them, pineapple is some fruit rich in water, fiber, minerals, and vitamins. Pineapple, it must be said, contains vitamins B1 and B6 which, like all B vitamins, help build the nervous system and maintain blood circulation.

Also, during toxicosis, pregnant women most of the time want something unusual.

A piece of ripe pineapple will be of great benefit to them, again according to those for whom consuming pineapple during pregnancy is a good thing to recommend.

It should be added that pineapple has a high-calorie content. One hundred grams of fruit contains 48 calories.

However, you should not be afraid of this high-calorie content. In the sense that one hundred grams of pineapple can go a long way in helping a pregnant woman to overcome the approaching vomiting. Likewise, the craving for the exotic will subside for a time.

It must therefore be said that pineapple helps to normalize blood pressure which increases in some women during pregnancy. Concretely, it can clean the walls of blood vessels.

However, especially in the third trimester, pineapple should not be overused by pregnant women.

In conclusion, I would say that I personally would not advise a pregnant woman to take pineapple in its various forms regularly without the advice of her doctor. However, a small slice now and then is unlikely to hurt, although there is no scientific evidence that pineapple can cause any harm to a pregnant woman.

2# How to eat pineapple?

Only fresh pineapple has clear benefits for pregnant women. The canned one is completely devoid of all vitamins and minerals.

On the other hand, it does contain a considerable amount of sugar that a pregnant woman, even though the desire outweighs all reasonable arguments, does not need to consume.

Also, pregnant women should not be tempted by dried pineapple candied fruit. Because these are not only real food waste but also they are sometimes full of dyes. Even though they have a large number of calories, they have no benefit.

They are also advised against eating pineapple in combination with dairy products.

Pineapple is very excellent when eaten separately from other foods, however, it should be consumed with caution on an empty stomach and stopped consuming at the slightest sign of warning.

During pregnancy, 200 g of pulp, i.e. 2 – 4 slices or 200 ml of freshly squeezed juice is the daily rate of pineapple to be consumed by pregnant women, according to those who advocate its consumption.

Note that the risk of developing allergic reactions and other unwanted consequences is greatly increased by overeating.

III- When should a pregnant woman not eat pineapple?

The pregnant woman who experiences particular signs while consuming pineapple, as already specified above, must stop doing it immediately before going to consult her doctor who normally has more information concerning her metabolism…

Otherwise, there is no scientific evidence of any danger of eating pineapple during pregnancy, despite caution.

For other pregnant women, it would be recommended to consume pineapple during pregnancy to allow the fetus to develop optimally. Because this fruit can give a nutritional boost to the fetus in the womb.

It should be noted that a portion of freshly cut pineapple contains about 79 mg of vitamin C. This vitamin is recognized as essential for the production of collagen, which promotes the growth not only of tendons, cartilage, bones of the baby, but also the growth of his skin.

Also, pregnant women, most of the time need 85 mg of vitamin C.

However, not all women can consume pineapple during pregnancy.

To preserve the health of the fetus and the pregnant woman, several foods are not recommended or outright prohibited.

As an illustration, they are recommended not to consume papaya. Because eating papaya during pregnancy causes a premature interruption of labor or sometimes leads to a miscarriage.

Also, pregnant women should avoid consuming grapes. It should be noted that some health professionals suggest that they avoid eating grapes during pregnancy.

Indeed, certain foods are not recommended for pregnant women. However, others are recommended to them.

This is the case with fruits rich in fiber.

Indeed, to fight against constipation and hemorrhoids that women suffer from during pregnancy, they are advised to consume 25 to 30 g each day.

VI- Pineapple juice to get pregnant

It should be noted from the outset that pineapple is recognized, despite the myth of its dangerousness seen above, as the emblem for some women having recourse to in vitro fertilization (IVF).

It is a fruit that is known for its positive virtues on fertility, which is why it has become a symbol of fertility.

Indeed, it appears that consuming pineapple on an empty stomach on the day of embryo implantation would promote the success of the intervention.

Therefore, a pineapple juice made properly using 100% natural and fresh pineapple will go a long way in helping you get pregnant.

You are advised to consume a glass of pineapple juice every morning early to give yourself a better chance of getting pregnant.

Note that no scientific study, to my knowledge, has provided clear evidence on this fact.

Pineapple: Nutrition, health benefits and all you need to know about this fruithttps://timesofindia.indiatimes.com/life-style/health-fitness/diet/pineapple-nutrition-health-benefits-and-all-you-need-to-know-about-this-fruit/articleshow/82130533.cms

what does pineapple juice do sexually for a man [aphrodisiac & benefits]

How to use boiled pineapple skin to lose weight?

7 Effects of Eating Pineapple at Night?

What to do with overripe pineapple?