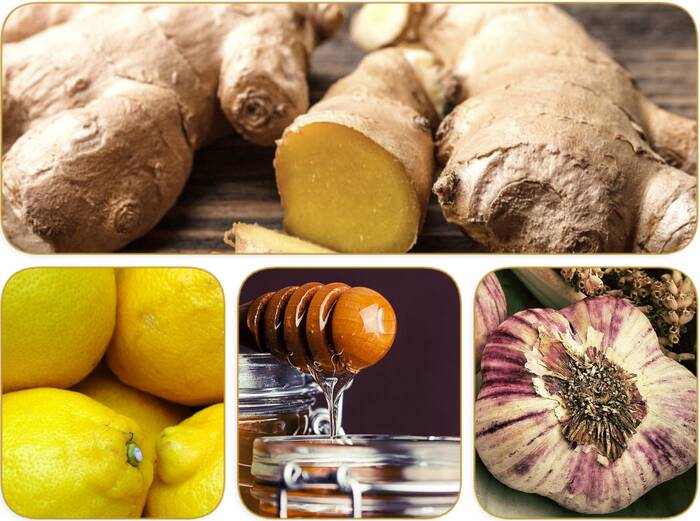 How to use the garlic, ginger, lemon and honey mixture as an aphrodisiac? Is it effective in reducing sexual impotence? What are its benefits? And what are the other aphrodisiac recipes based on ginger?

I- causes of the sexual impotence

Male sexual impotence, also known as erectile dysfunction, is a partial or total inability to achieve or maintain an erection sufficient for satisfactory sexual performance.

In men, especially after the age of 40, this disorder is quite common.

There are several causes of male sexual impotence, which may even be the first symptom of a previously undiagnosed pathology.

It is with the help of the balance of blood flow between the inside and outside of the penis that erections are ensured or possible.

There are also other diseases that can cause erectile dysfunction. We can list: diabetes, neurological diseases, benign prostate hyperplasia and endocrine disorders.

Female sexual impotence is most often caused by frigidity, which is also known as “hypoactive sexual desire disorder”. This disorder is characterized by a lack of interest in sex.

There are many causes of female frigidity. Thus, sexual desire disorders experienced by women can be caused by many psychological or medical factors.

Frigidity can appear suddenly or gradually. It can also occur from the beginning of sexual life.

Depression and exhaustion can also cause frigidity in some women. Various aspects of a woman’s life, such as mental stress, family life, work and so on, can exhaust and stress her.

Also, the lack of knowledge about oneself and one’s partner often causes sexual incompatibility in the couple and can generate the appearance of frigidity in women.

Let’s discover the recipe of garlic, ginger, lemon and honey as an aphrodisiac in the following title.

II- Recipe of garlic, ginger, lemon and honey as an aphrodisiac

This recipe, in addition to being a natural aphrodisiac is a real nutritional. In the sense that it not only strengthens the immune defense, but also optimizes your health.

You can consume it as a preventive or curative remedy, because it allows you to effectively fight the various ailments of everyday life, as soon as fall arrives and its small ailments.

To make this recipe, you need the following ingredients: 4 cm of fresh ginger, 1 untreated lemon, 4 to 5 cloves of garlic, 1 to 2 teaspoons of honey and 250 ml of water.

The preparation time for this recipe is 2 minutes and the cooking time is 10 minutes.

To prepare this recipe with garlic, ginger, lemon and honey, first grate the ginger and cut the lemon into small pieces.

Then, you have to peel the garlic and cook all the ingredients on a very low heat, stirring continuously. Do not forget to add the honey and water.

Finally, when the recipe has a syrupy texture, turn off the heat and strain. It is advised to consume this recipe immediately.

It is also recommended to drink this recipe with garlic, ginger, lemon and honey, on an empty stomach in the morning to take advantage of all the nutritional benefits on health.

And you are also a recommended to increase the amount of garlic and use a whole head of garlic if you want to make a curative treatment and stimulate the immune system to the maximum. It will also play a significant natural aphrodisiac role.

Let’s discuss the benefits of this recipe in depth in the following lines.

III- The benefits of the recipe with ginger, honey, garlic and lemon

This recipe made with garlic, ginger, lemon and honey has considerable aphrodisiac virtues. Garlic, for example, helps to stimulate the reproductive function by stimulating the formation of spermatozoa.

However, we cannot state with the utmost rigor that garlic has vasodilator powers that promote blood circulation. This would contribute to the maintenance of an excellent erection.

In the same vein, as far as ginger is concerned, it must be said that for both men and women, this spice with a pungent taste is widely used as an aphrodisiac to stimulate sexual appetite. It is also the same for lemon.

However, more research is needed in this area to definitively confirm the links between them, especially in the case of humans.

IV- Other recipes for powerful aphrodisiacs

You can make a very powerful aphrodisiac using 4 cloves and a piece of ginger for a cup of water.

As for the preparation, you have to bring the water to boil at first. Add the cloves and the piece of fresh organic ginger in the water, then let it infuse for 20 minutes in a second time.

It is recommended to take one cup per day and preferably half an hour before sexual relations. You have the possibility to combine the clove with other ingredients such as fenugreek, banded wood, maca, etc.

For the preparation of this aphrodisiac recipe for one person, you need to have at your disposal: 1 piece of fresh ginger or a teaspoon of ginger powder, 50 g of fresh pineapple flesh, 175 ml of water, 10 g of light cane sugar and a few drops of lemon juice if possible.

For the preparation itself, first of all, you have to peel the pineapple and cut the flesh into pieces. You must do the same for the ginger if it is fresh.

Then mix the pineapple and ginger in a blender. Add water and mix again. Finally, in order to filter the mixture, you must pass the drink through a sieve.

Add sugar and a few drops of lemon juice and mix. Before serving, keep it in a cool place for 2 hours.

You can also make a very good aphrodisiac recipe with chocolate and ginger. It is necessary to have a quantity of 180 g of chocolate with 70 % of cocoa and 5 cm of ginger.

To prepare, first grate the piece of ginger and roughly cut the chocolate with a knife.

Then, you have to heat the chocolate in a saucepan. Finally, to finish cooking, add the ginger and mix well.