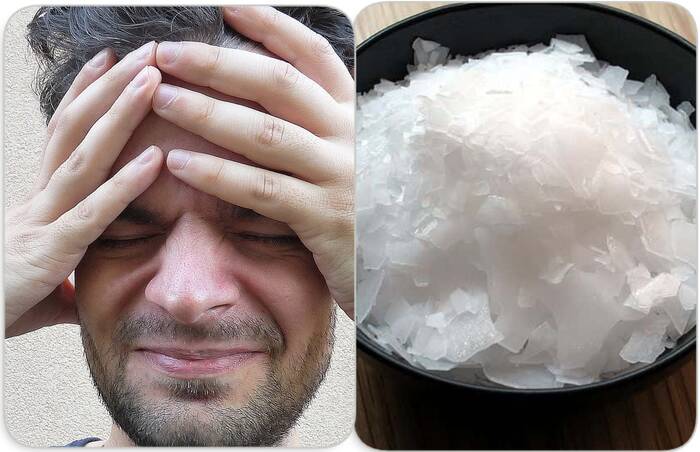 I- What Is Magnesium?

Magnesium is a mineral involved in many functions of the body in children and adults.

Magnesium helps reduce fatigue and assists in the normal functioning of the nervous system.

It is also involved in normal psychological functions such as concentration, reasoning, and memory.

In general, we find up to 24 g of magnesium in the body, of which approximately 65% is stored in the bones, which represent a reservoir that can be mobilized in part when needed.

A certain amount of magnesium is also found in the muscles and certain organs such as the liver, the heart, and the kidneys.

II- Can Magnesium Help with Headaches and Migraines

Magnesium is very important to preserve the nervous and muscular balance and to relieve many ailments.

Thus, it helps to reduce fatigue and stress, which are two of the factors that can trigger a migraine.

During migraine attacks, the level of magnesium in the blood and cells often drops.

During a particularly severe and long-lasting attack, a single infusion of magnesium can stop the migraine permanently.

In addition, sufficient magnesium intake effectively reduces the frequency and intensity of migraines.

# How to Use Magnesium for Migraines and Headaches

Magnesium plays a very important role in the calcium channels that regulate the vasoconstriction of the vessels.

If you have migraines, take regular courses of magnesium chloride as a preventive measure.

In case of migraine or headaches, taking 1 glass of magnesium chloride solution can relieve you.

Taking magnesium as a preventive measure during attacks, at a rate of 300 to 600 mg per day, could reduce the frequency and severity of attacks.

# How Does Magnesium Prevent Migraine?

Migraines are painful and frequent, sometimes accompanied by nausea and vomiting. Magnesium consumption can solve this problem.

Some studies suggest that magnesium can prevent and help treat migraines.

In addition, a one-gram supplement of magnesium can relieve an acute migraine attack faster and more effectively than a common medication.

Magnesium plays an essential role in brain function and mood, and low levels are linked to an increased risk of depression.

Hypomagnesemia is a serum magnesium concentration below 1.8 mg/dl (< 0.70 mmol/L). The causes are inadequate magnesium intake and absorption.

They are associated with neurological signs including generalized convulsions, tetany, and muscle spasms. Treatment is based on an adequate intake of magnesium.

Magnesium is a very important intracellular element involved in many cellular functions.

However, magnesium deficiency can play a very important role in the pathogenesis of migraine by promoting cortical expansion depression.

These magnesium deficiencies may also cause impaired neurotransmitter release and platelet hyper aggregation.

Studies have shown that treating acute headaches with intravenous or oral magnesium can be effective, particularly in certain patient subgroups.

# Magnesium in the Body

Magnesium is one of the most abundant minerals in the body. The human body contains about 25 g of magnesium, of which 50-60% is found in the bones and 25% in the muscles.

However, it is involved in more than 300 biological reactions such as energy production, DNA, and protein synthesis.

Magnesium is recognized for its role in the nervous system and its action on muscle contraction.

To relieve a tension headache, it is best for you to consume magnesium, as it is an anti-inflammatory and analgesic, very effective.

III- Can Magnesium Cause Headaches

The answer is no.

But the lack of magnesium is involved in several physiological mechanisms that cause headaches.

Therefore, a magnesium deficiency is one of the many factors that predispose to migraine.

IV- Type of Magnesium for Migraines and Headaches

Magnesium is a widely used product to prevent migraines. It has been shown that 50% of migraine sufferers suffer from a magnesium deficiency.

A consumption reduces the frequency of migraines by an average of 40% as well as the intensity of the pain during the attacks.

Nitrate magnesium is a form that has proven to be effective against migraine with tolerable side effects.

V- Magnesium for Headaches During Pregnancy

During pregnancy, the need for magnesium increases, so you need to be careful about increased intake.

Magnesium plays a very important role in helping the body adapt to the changes that come with pregnancy.

Magnesium deficiency can exacerbate common complaints during pregnancy, such as headaches.

VI- How Much Magnesium Should I Take for a Headache?

This intake is increased by 25 mg for growing children and adolescents, 40 mg during pregnancy, and 30 mg during breastfeeding.

VII- Is It Healthy to Take Magnesium Daily?

Overall, it is recommended to take 5 mg of magnesium per kilo per day.

That is to say 300-350 mg of magnesium per day for a woman weighing about 60 kg in order not to be deficient in magnesium.

However, it is important to be careful not to overdo it.

There is no scientific study that implicates magnesium as an element that can aggravate a migraine or a headache.

However, as we have pointed out throughout this article, an insufficient intake of magnesium considerably increases the frequency and intensity of migraines.

IX- Can Magnesium Deficiency Cause Headaches?

X- What Food is Highest in Magnesium?

Dark chocolate appears to be the source of magnesium par excellence. However, many other foods contain it.

For example, you can find it in green leafy vegetables such as spinach and cabbage. In legumes such as chickpeas, white beans, and lentils.

XI- What Drinks are High in Magnesium?

Some mineral waters are excellent sources of magnesium. In general, 1 liter of mineral water per day contains nearly 120 mg of magnesium, which corresponds to about 31% of the recommended daily intake.

It is therefore water to be preferred in case of magnesium deficiency.

XII- How Long Does It Take Magnesium to Work for Migraines?

Following a long period of stress, the cure can be followed for 1 to 3 months. However, to make up for a deficiency, 1 to 2 months of treatment are sufficient with a maximum dose of 320 mg/day.

There is also an almost immediate effect for each intake of magnesium which is manifested by a small attenuation of brain fog and headaches.

Applied directly to the skin, magnesium oil is highly recommended for headache relief.

To soothe headaches, apply one or two sprays directly to the temples.

XIV- Can Magnesium Citrate Cause Headaches

From headaches, muscle pain, to fibromyalgia symptoms, it acts as a true pain reliever.

The answer is no.

Although it is rare, an overdose of magnesium can cause side effects.

An excess of magnesium (hypermagnesemia) can cause diarrhea, vomiting, and a drop in blood pressure (hypotension).

In the most severe cases, magnesium overdose can cause cardiovascular and kidney problems.

On the other hand, too much magnesium in the body has toxic effects on the body.

Individuals suffering from renal insufficiency are the most exposed to these effects.

Magnesium supplements can increase magnesium levels, particularly those in the form of citrate, lactate, aspartate, and magnesium chloride.

In addition, people who take magnesium supplements usually get more than the recommended daily amount.

Magnesium supplements can also interact with certain types of antibiotics and other medications.

Magnesium is an essential mineral

Can magnesium deficiency cause hair loss?

How to do a bowel cleanse with magnesium citrate?

How to Use Magnesium for Belly Fat Loss?