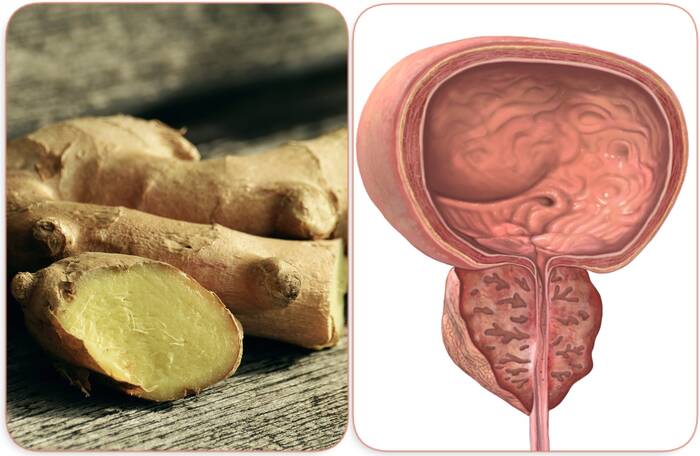 How to use ginger for prostate health? Is ginger good for the prostate?  Are there any studies that support this claim? What are the effects of ginger on prostate cancer cells? And what are the other most recommended plants to cure or diminish the effect of the multiple pathologies of the prostate?

I. What is the Prostate and Its Concerns?

Located between the pubis and the rectum, the prostate is a gland of the male genital system. It surrounds the urethra and is about the size of a walnut or a chestnut. It is a kind of canal that carries urine from the bladder to the outside.

The prostate promotes and participates in the production of seminal fluid, which makes up the bulk of semen. It should be noted that the seminal vesicles also secrete part of the seminal fluid.

Several problems can affect the prostate.

Here are the most common: prostatitis or inflammation of the prostate, prostate cancer, and benign prostatic hypertrophy or prostate adenoma, which is the enlargement of the prostate gland and is very common in older men.

You are strongly advised to consult your doctor if you have genitourinary problems.

As regular symptoms of prostate cancer, we can mention:

Fever associated with chills, urinary symptoms such as burning during urination, too frequent urges to urinate, pain in the pubic area, at the urethra, penis, and sometimes the rectum, general malaise, muscle pain, a painful prostate when touching the rectum.

It should also be noted that the prostate causes particularly annoying symptoms: very frequent urges to urinate, difficulty in urinating, in emptying the bladder, pain, etc. Therefore, you must seek immediate medical attention.

Even though prostate cancer, like all cancers, can be difficult to eradicate and presents risks of metastasis, it must be said that prostate cancer is generally well treated.

Unfortunately, prostate cancer remains the 4th leading cause of cancer mortality. For example, in France alone, there are approximately 10,000 deaths per year.

However, in general, prostate cancer is a disease that progresses slowly and can be diagnosed early.

Let’s discover the studies on ginger and prostate cancer.

More and more, the anti-cancer effects of spices are recognized and studied. Nowadays, almost everyone knows that ginger is an excellent source of phenols.

Also, most people know that ginger has marked antioxidant, anti-inflammatory, and anti-proliferative properties.

In 2012, in the British Journal of Nutrition, a scientific study was published proving that ginger can inhibit and induce the destruction of prostate cancer cells in mice. The results were remarkable.

Specifically, during this scientific study, an oral dose of 100 mg of ginger per kilo of weight was administered to mice. The growth and progression of prostate cancer cells were inhibited by 56% by ginger.

In addition, ginger showed no toxicity in normal tissues. This scientific study, according to the researchers, is the first to demonstrate the anticancer properties of ginger in-vitro and in-vivo in the context of prostate cancer.

In short, the preventive and curative properties of ginger against prostate cancer have been revealed by this study from Georgia State University (Atlanta).

Let’s now discuss the active ingredients and properties of ginger.

Ginger is known to have antioxidant properties. In general, antioxidants are compounds that protect the body’s cells from damage caused by free radicals.

These free radicals are highly reactive molecules that are believed to be involved in the development of cardiovascular disease, certain cancers, and other age-related diseases.

About forty antioxidant compounds have been discovered in ginger.

It is important to note that some of these antioxidant compounds are heat resistant and can even be released during cooking.

This could explain the increased antioxidant activity of ginger when it is cooked.

Ginger is also known for its pungent taste. Gingerol is the main active compound responsible for the pungent taste of fresh ginger. Its anti-inflammatory and antioxidant properties are well known. Also, ginger helps a lot to relieve nausea and vomiting.

In this regard, many studies have evaluated the anti-emetic effect attributed to ginger. That is, the ability to prevent or stop nausea and vomiting. Finally, let’s discover the other plants to treat the prostate.

Ginger root is well known for its potassium and manganese content. Potassium is essential for maintaining normal blood circulation and muscle and nerve function, while manganese helps absorb beneficial vitamins and minerals.

Ginger contains vitamins A, C, and E, beta-carotene, and zinc, all-powerful antioxidants that protect the prostate from harmful free radicals.

Ginger is effective in blocking 5-lipoxygenase, an enzyme that promotes the development of cancer. It helps reduce the risk of cancer and even helps reduce tumors in the prostate.

Ginger should not be used alone in the treatment or prevention of prostate cancer. If you have symptoms or want to know more about preventing prostate cancer, it is imperative to consult a urologist or at least a general practitioner.

Many studies have examined the link between ginger and prostate cancer, and their results are also positive: Regular consumption of concentrated ginger daily can destroy prostate cancer cells by 56%.

VII. How to Use Ginger for Prostate

The ginger plant is known for its anti-inflammatory, antioxidant, and anti-proliferative effects on tumors, which makes ginger water a promising chemo-preventive product.

Ginger water has significant growth inhibition and death-inducing effects in a spectrum of prostate cells.

It helps reduce the risk of prostate cancer by protecting the prostate from damage and inflammation, thus contributing to prostate health.

This ginger and turmeric tea recipe is packed with antioxidants, which are defined as a substance (such as beta-carotene or vitamin C) that inhibits oxidation or reactions promoted by oxygen, peroxides, or free radicals.

Many prostate cancer diets suggest a diet rich in antioxidants, such as ginger and turmeric tea.

There is evidence to suggest that a diet rich in garlic and ginger may help protect against certain types of cancer.

This may be due to their concentration of anti-inflammatory and antioxidant compounds that help protect cells from damage.

Ginger is known for its anti-inflammatory, antioxidant, and antiproliferative activities, indicating its promising role as a chemo-preventive agent.

5. Is Raw Ginger Good for Prostate?

IX. Other Plants to Treat the Prostate

In addition to ginger, several other plants can be used to treat the prostate. We will list at least two of these plants and their actions.

On the one hand, we can mention Pygeum Africanum which means African plum tree. The extract of the bark of the African plum tree is a phytotherapeutic product that promotes the improvement of urinary flow.

Therefore, this natural product from an African tree improves the quality of life of people with symptomatic benign prostatic hypertrophy.

The symptoms of this disease are reduced by the consumption of this plant. To relieve the different symptoms of mild or moderate benign prostatic hyperplasia, it is possible to associate African plum with saw palmetto berries, as well as nettle roots.

On the other hand, Serenoa Repens, better known as saw palmetto berry, is a plant that can treat the prostate. It should be noted that this second natural solution is one of the most used with the African plum tree.

It is the dwarf palmetto berry that also proves to be effective in the treatment of mild or moderate benign prostate hypertrophy.

In concrete terms, its consumption is as effective as the use of synthetic drugs and does not generate any undesirable effects on erection and sexual function.

To treat mild and moderate prostate symptoms, it is recommended to use palmetto berries. And this, in combination with other natural solutions or with medicines.

It is not enough to know that these plants are beneficial for the different pathologies of the prostate but it is more judicious to know all the foods that seriously contribute to creating all these diseases or accentuate them.

Here are the foods to avoid in case of prostate problems in addition to taking ginger cures and other herbs:

XI. How to Clean Up Your Prostate and Keep it Healthy

How to use ginger to get pregnant fast

How to use cloves and ginger as an aphrodisiac?