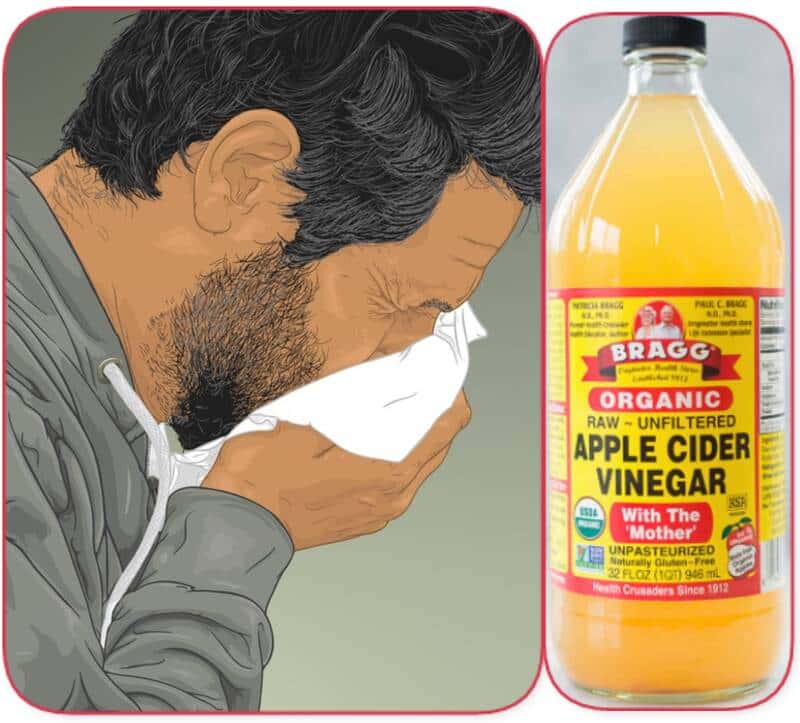 What about apple cider vinegar for phlegm in the throat? Can cider vinegar be used against mucus? Is it effective in regulating the amount of mucus in different parts of the body? What are its different methods of use? And finally, what are the other natural remedies to get rid of excess mucus and phlegm in the body?

I -Why Phlegm Stuck in the Throat and Lungs

Mucus and phlegm are naturally produced by the body. The function of mucus is to protect and lubricate the mucous membranes.

By providing lubrication to organs such as the nose, lungs, and stomach, the mucus prevents them from becoming dehydrated.

Nevertheless, it can become cumbersome, piling up in the lungs and impeding breathing.

Too much mucus is a sign of a disease, such as the common cold, cystic fibrosis, or bronchitis. It is to defend itself that the body increases its mucus secretion.

It is also by reflex that the body coughs to get rid of the cumbersome mucus. This is called a wet cough, which allows the excess mucus to be expelled from the body.

If this is not enough, several natural remedies can help you in these cases.

II- What is Apple Cider Vinegar?

First, there is an alcoholic fermentation, obtained by adding bacteria and a ferment to apple juice. The sugar is thus transformed into alcohol.

This alcohol is transformed into vinegar due to bacteria producing acetic acid.

III- Apple Cider Vinegar for Phlegm in the Throat

#1. How Does Cider Vinegar Work to Regulate Mucus in the Throat

Cider vinegar contains acetic acid, amino acids, and antioxidants. It relieves coughs due to its antibacterial, antiviral, and antifungal virtues.

Its absorption helps the body to better fight against bacteria, and to disinfect itself effectively.

By its action on the whole body and particularly on the various mucus-producing glands, cider vinegar manages to regulate the production of excess mucus while acting on the cause of infections by cleaning the body and the various organs!

#2. How to Use Apple Cider Vinegar to Get Rid of Phlegm in your Throat

In a 1/3 cup of warm water, add two teaspoons of cider vinegar. Gargle for a long time with it, before spitting.

In a container of warm water, mix between 2 and 3 tablespoons of cider vinegar. With your head under a towel, inhale the steam.

This will help you expel the mucus.

You can make your syrup by mixing ½ cup of cider vinegar with ½ cup of warm water. Add 1 teaspoon of cayenne pepper, and 3 teaspoons of honey.

Consume some of this syrup when you feel your chest is congested. It will help you get rid of your excess mucus.

Cider vinegar can be used internally as well as externally for mucus.

This tip is sometimes very effective in stopping certain types of coughs.

Apple cider vinegar is a natural solution capable of destroying bacteria and certain viruses. It has recognized antibacterial properties that make it a natural antibiotic.

You can use apple cider vinegar to treat your irritated throat. In case of irritation and itching in the throat, cider vinegar can provide relief. For this kind of problem, one tip is to use it to make gargles.

In a glass, fill half of it with water and the other half with cider vinegar. Gargle with this mixture several times a day, at least 4 times a day. A minimum of one hour should elapse between each session.

For this preparation, you will need cider vinegar, but also cayenne pepper, honey, ginger, and lemon juice.

This drink will clear your bronchi and improve your breathing.

An irritated throat benefits greatly from drinking apple cider vinegar. Nevertheless, it is important to always consume it diluted. Cider vinegar has many advantages and benefits, but it should only be used purely in very few cases.

However, if used properly, cider vinegar is not known to be dangerous for the throat.

III- Other Natural Remedies Against Mucus and Phlegm in the Throat

In a juicer, squeeze a previously peeled onion. Put in the juice of a lemon. Boil the whole with a cup of water for 2 to 3 minutes. Once the mixture has cooled, add a teaspoon of honey.

Drink this mixture three times a day. You will feel better afterward. Onion is a natural antibiotic and an excellent regulator of mucus in different parts of the body.

The recipe consists of heating two tablespoons of honey. The temperature should not exceed 40° so that the honey keeps its properties.

Once your honey is hot, add a teaspoon of grated ginger.

Every day, take two tablespoons of this mixture for three days.

Ginger is very effective for colds, and honey is an antifungal and antibacterial agent. Their joint action is very useful against mucus.

In a glass of warm plant milk, add half a teaspoon of black pepper and turmeric. Avoid regular milk, which can increase the mucus in your throat and lungs.

Also, add a teaspoon of honey, and drink this mixture daily.

Turmeric is a product that purifies the body and strengthens the immune system that regulates the production of mucus in the body.

Brew four sprigs of thyme in a cup of boiling water for an hour. Then strain the mixture and add the same amount of sugar.

Cook in a saucepan over low heat for one hour.

Consume two tablespoons of this syrup every day.

Dried thyme syrup is an ideal product in cases of bronchitis.

IV- Can Apple Cider Vinegar Be Used as a Remedy Against Coughs?

Yes, apple cider vinegar can indeed be used to fight coughs. It is important to know that a cough can be caused by bacteria or a virus. By acting against them, cider vinegar can relieve you of your cough. Moreover, its consumption has an anti-inflammatory effect.

Against cough, ginger is among the most famous natural products. In association with apple cider vinegar, ginger brings real relief.

The recipe for using apple cider vinegar and ginger against cough is simple.

In a large glass of water, mix two tablespoons of cider vinegar and a teaspoon of ginger powder.

Drink this twice a day until you feel soothed.

To relieve your cough with a mixture of apple cider vinegar and cayenne pepper, the method is simple.

Take a large glass of water. In it, add two tablespoons of pure cider vinegar along with ¼ teaspoon of cayenne pepper.

You can add a little bit of honey to it to bring sweetness. Drink from this mixture twice a day.

The properties of honey to relieve coughs are no longer in question. In a large glass of water, add one tablespoon of raw honey and two apple cider vinegar.

As for the previous mixtures, consume twice a day.

V- Can Apple Cider Vinegar Be Used as a Cold Remedy?

Apple cider vinegar can also be used to relieve colds. For this, you can use it as an inhalation.

Use a large bowl of boiling water into which you will have poured between two and three spoons of apple cider vinegar.

With your face tilted up, breathe in the vapors until you feel better.

IV- Side Effects and Risks of Apple Cider Vinegar

Cider vinegar is a natural product rich in therapeutic properties. But its consumption must be careful and well regulated in order not to cause undesirable effects.

Taken in too large quantities, the acids it contains can attack the teeth. In the long run, this can cause dental sensitivity, due to the reduction of the enamel.

On the skin and in the digestive tract, cider vinegar can also be harmful. It can cause skin burns, especially on sensitive skin.

In the digestive tract, the ingestion of cider vinegar increases the risks of hypoglycemia.

Nausea is also a possible side effect of excessive consumption of cider vinegar.

And as the last warning, it is imperative to avoid taking pure cider vinegar without being diluted in water or another liquid.

Marvels of Mucus and Phlegm

All About That Mucus: How it keeps us healthy

Benefits of an apple cider vinegar detox for the liver