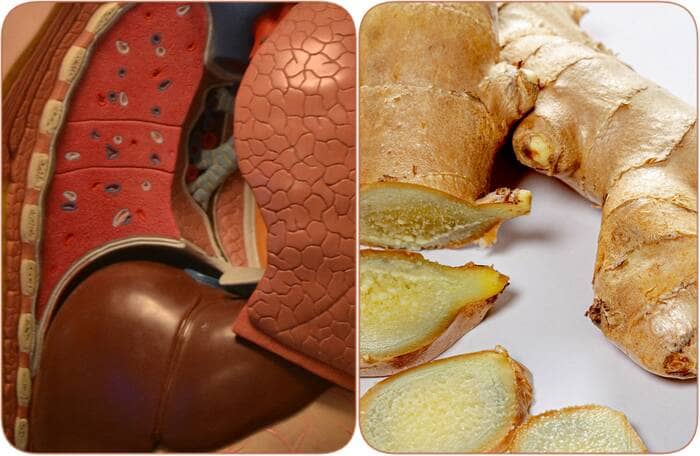 How to use ginger for liver cleanse? What recipes do we recommend? What are its nutritional values and composition? Is Ginger Good for Diabetes? And finally what are its side effects and contraindications?

I. Is Ginger Good for Liver Detox?

Ginger has been consumed for a long time in the four corners of the world to alleviate and relieve various ailments. It is recognized as an excellent rhizome for health.

It is good to eat ginger because it has antiseptic, anti-inflammatory, and antiemetic virtues.

Ginger can be consumed or used in different forms, such as capsules, powder, herbal tea, fresh or syrup.

II. How to Use Ginger for Liver Cleanse

1. Benefits of Ginger for the Liver

Ginger is very good for the liver. A small scientific study was conducted on 44 patients who suffer from liver disease.

Some of them consumed 2 g per day of ginger and others a placebo for 12 weeks. It should be noted that participants in both groups were asked to improve their diet and thus were encouraged to exercise.

In the group that took ginger, there was a reduction in bad liver enzymes, hepatic steatosis, insulin resistance, and markers of inflammation, compared to the placebo.

This was possible due to the anti-inflammatory and anti-oxidant properties of ginger.

Fibrosis is an abundant formation of scar tissue in the liver. This happens most of the time when the liver is trying to repair itself.

To remedy this, ginger can be used. In fact, ginger helps to prevent and fight most liver problems.

Fatty liver is a disease characterized by the accumulation of fat in the liver. It is sometimes caused by excessive consumption of alcohol.

Ginger plays a hepato-protective role in preventing this type of disease.

4. How Often Do You Detox the Liver with Ginger?

To avoid the adverse effects of ginger consumption, it is best to perform liver detoxification only when necessary.

However, ginger before being a remedy acts mainly as a preventive. And it is, therefore, more beneficial to consume it in this capacity.

For this purpose, it is recommended to take it daily, but in a specific dose, not more than 4g/day.

5. Recipes of Ginger for Liver Cleanse

We are going to share with you several recipes that will help you cleanse your liver.

Beet, a must when talking about liver detox, goes very well with other liver protectors like turmeric or ginger.

Here are the ingredients to be able to make this recipe: 2 carrots, 1 beet, 1 celery stalk, 1⁄2 lemon, and ginger.

To prepare this recipe, run all the ingredients through a juicer.

It should also be noted that the recipe “garlic and ginger” also helps to cleanse the liver.

The recipe is very simple. Just mix the same amount of the two ingredients and take a teaspoon 2 to 3 times a day.

To reduce the acidic taste of the mixture you can add a little natural honey.

The combination of lemon and ginger gives rise to a very useful tea to clean the liver.

These two foods, by combining their curative virtues give birth to a perfect remedy to keep the form and clean the liver naturally.

The ginger tea is also very simple. Put a teaspoon of ginger and half a medium lemon in hot water and squeeze it into the tea. And to mitigate the relatively bitter taste of the tea, you can add a teaspoon of natural honey.

To make this recipe, you need the following ingredients: 1/2 bunch of kale, 1 lemon, 3 sticks of celery, 1 apple, 1 bunch of parsley, and ginger.

For the preparation, put all the ingredients in the juice extractor. Also, to clean the liver, you can add fresh dandelion to your juice, it is a depurative and protector of the liver.

However, be careful with the quantities, because its taste is very bitter.

Ginger, in the form of tea, can act at the level of the liver to promote the manufacture and secretion of bile and thus helps in the case of difficult digestion.

This ginger-based tea also helps the kidneys and cancer.

As for the preparation: first, bring the water to a boil. Then add the ginger and turmeric, reduce the heat and simmer for 10 minutes. Finally, strain into a cup.

Add honey to taste. Ginger is not only good for the liver but also helps diabetics.

III. Is Ginger Good for Diabetes?

Blood sugar levels can be controlled by ginger. For this reason, it is strongly recommended that people who suffer from diabetes consume or eat ginger.

A scientific study conducted at the University of Sydney, Australia, proved that ginger, independently of insulin, increases the uptake of glucose by muscle cells.

As a result, there is excellent control of sugar in the blood. This is very necessary for people who suffer from diabetes.

In this regard, Dr. Basil Roufogalis stated in the journal Planta Medica that: “This process helps in the management of high blood sugar levels, which create long-term complications in diabetic patients, and would allow the cells to function independently of insulin.

Also, a recently conducted scientific study proved in individuals with type 2 diabetes a beneficial effect of consuming 3 g of ginger powder for 8 weeks.

Gingerol is the main active ingredient in ginger. It gives ginger its spicy taste. It is a phenolic compound of the vanilloid family whose chemical formula is C17H26O4.

Ginger contains lipids, proteins, and carbohydrates. It is also very rich in minerals such as calcium, iron, manganese, magnesium, phosphorus, and sodium.

As far as vitamins are concerned, ginger contains those of the B family and also vitamin C, which disappears once ginger is dried. Finally, let’s talk about the undesirable effects and contra-indications of ginger consumption.

V. Other Health Benefits of Ginger

In addition to its liver cleansing effects, ginger also aids digestion, reduces nausea and vomiting, and reduces feelings of fatigue, headaches, and migraines.

To top it all off, ginger is a powerful anti-inflammatory and is extremely beneficial to the heart.

VI. Other Detox Drinks to Cleanse the Liver

Also known as turmeric latte, golden milk, or golden milk, this cocktail is a condensation of delicious and healthy foods.

It has many benefits for memory and brain function. It also helps to detoxify the liver.

To make the recipe, heat a glass of milk and put in a teaspoon of turmeric. Mix until you obtain a homogeneous drink. You can add a pinch of black pepper and natural honey to improve its taste.

Used all over the world, chamomile tea is reputed to be an effective natural remedy offering many benefits.

At the level of the liver, this drink plays the role of a booster. It promotes the secretion of bile.

Mint is widely used to relieve tired livers. It stimulates the secretion and facilitates the evacuation of bile.

However, to consume mint, it is easier to take it in liquid form, hence mint tea is widely consumed in the world.

Rich in minerals and vitamins, oatmeal and cinnamon drinks are listed among the best drinks for liver detoxification.

Nowadays, they are more and more consumed in the world, especially because they are easy to digest.

Ginger consumed in high doses can sometimes cause allergies and skin irritations.

It could also trigger stomach aches in case of excessive ingestion. Therefore, the consumption of ginger should not exceed 1.5 g to avoid these inconveniences.

Also, it should not be forgotten that excessive consumption of ginger can cause bloating.

Because of its anticoagulant properties, the consumption of ginger is strongly discouraged before a surgical operation.

Even if it is not expressly contraindicated for pregnant women, it is recommended not to consume it over a long period.

VIII. Other Questions About Ginger for Liver Cleanse

When the liver needs detoxification, some symptoms like chronic fatigue, bad breath, and nausea may appear.

After liver detoxification, if these symptoms disappear, then it is very likely that the operation performed was effective.

2. Is It Good to Drink Ginger Tea Everyday?

Yes, drinking ginger tea every day is great for the immune system. It has notable effects on digestion and on muscle pain, which becomes less frequent.

3. Can Too Much Ginger Be Harmful?

When ginger is consumed in excess, many side effects such as burning and upset stomach, diarrhea, as well as bloating can occur.

However, these side effects are “not dangerous”. They are just symptoms that do not lead to serious illness.

4. Can I Eat Ginger in an Empty Stomach?

5. Is Ginger Good for All Liver Problems

Ginger not only cleanses the liver but also protects it from diseases, infections, and inflammations.

It can therefore prevent and respond to common liver problems, but not all. Some diseases cannot be managed by ginger and require the advice and guidance of a qualified physician.

6. Is Ginger Bad for Fatty Liver?

Ginger is a food known to be a reference remedy for all kinds of liver diseases, including fatty liver disease.

Once in the body, ginger is a hepatoprotector. That is, it helps to prevent liver inflammation as well as other diseases that are dangerous to the liver.

There is no harm in drinking tea at night. In fact, ginger is not harmful to sleep.

On the contrary, it sometimes helps to improve our sleep. However, this is only the case when consumed in low doses.

If the dose consumed is high enough, ginger becomes an anti-fatigue remedy which is not advantageous when we want to sleep. Hence the need to consume it in the evening, but in low doses.

How to use ginger to get pregnant fast

How to use cloves and ginger as an aphrodisiac?

Garlic, ginger, lemon and honey as an aphrodisiac [Recipes & Benefits].